Centre Siale Piutau of Tonga celebrates with the fans following his team’s 19-14 victory during the IRB 2011 Rugby World Cup Pool A match between France and Tonga at Wellington, New Zealand. (Photo by Mike Hewitt/Getty Images)

The beauty of the World Cup is not confined to events on the pitch. The tournament is still three weeks away, but there might not be a more incongruously glorious scene than the Tongan national rugby team, replete in national dress, engaging in a sing-off against the Cranleigh choral society.

Tongans love a sing-song. By all accounts, they brought the house down and, for the past couple of weeks, they have been leaving their Pacific stamp on this picturesque corner of the Surrey countryside training with Cranleigh School first XV and worshipping at the local baptist church. Across the country, towns and villages will also play host to Georgians, Romanians and Canadians and will hopefully witness the same cultural exchanges. 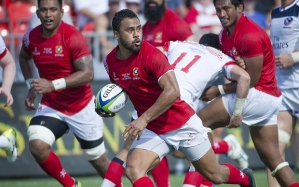 Telusa Veainu of Tonga runs in a try against the US during their World Rugby Pacific Nations Cup match in Toronto, Canada in July. AFP PHOTO/Getty Images

END_OF_DOCUMENT_TOKEN_TO_BE_REPLACED

Fiji sent out a Rugby World Cup warning to their Pool A rivals England, Australia, Wales and Uruguay after a ruthless display of finishing saw them claim the Pacific Nations Cup 2015 title at the expense of rivals Samoa.

Second-rower Leone Nakawara grabbed two of his side’s five tries with the others coming from influential scrum-half Niko Matawalu, Kini Murimurivalu and Akapusi Qera in a see-saw contest that saw Fiji race into a 17-3 lead before being reeled back in by Samoa. But just as the physical Samoans appeared to have taken control of the contest, Fiji came storming back with three quickfire tries that saw them reclaim the initiative and pull clear.

END_OF_DOCUMENT_TOKEN_TO_BE_REPLACED

Manu Samoa launch another attack against Canada at the BMO Field in Toronto. Photo: World Rugby

Samoa and Fiji will meet again in the World Rugby Pacific Nations Cup 2015 final after both maintained their unbeaten records with tight victories over hosts Canada and Japan in Toronto on Wednesday.

The Samoans needed a try on the stroke of full-time by Sakaria Taulafo to snatch a 21-20 victory over Canada, the replacement prop catching a loose ball off a ricochet from a lineout to dive over and secure the final place.

Fiji, who had played out a thrilling 30-30 draw with Samoa in round two, had to hang on for a 27-22 victory against Japan, finishing the match with only 13 players as the Brave Blossoms came within inches of completing their comeback with another try.

END_OF_DOCUMENT_TOKEN_TO_BE_REPLACED

Tonga scored three tries in the final quarter as they came from behind to beat Georgia 23-9 in Tbilisi on Saturday.

Trailing 9-6 on the hour mark, the Islanders turned on the gas, scoring three unanswered tries in 12 minutes to kick off their European tour with a bang.

END_OF_DOCUMENT_TOKEN_TO_BE_REPLACED 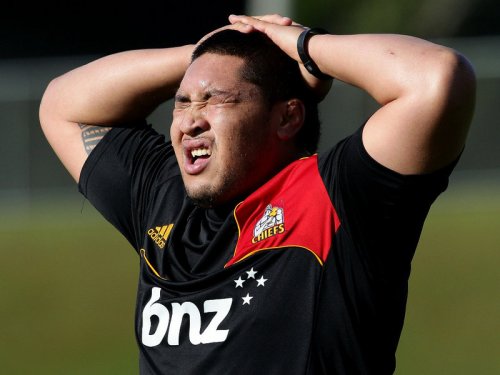 Ben bides time to make up his mind to go black or red. Photo: Skysports

Chiefs prop Ben Tameifuna has changed his mind about playing for Tonga and now hopes to play for New Zealand instead.

Tameifuna, who was in the All Blacks training squad in 2012, was originally selected for Tonga’s end of year tour which consists of away Tests against Georgia, the United States and Scotland.

END_OF_DOCUMENT_TOKEN_TO_BE_REPLACED

Chiefs prop Ben Tameifuna is looking to conclude his push to play for New Zealand and instead don the shirt of Tonga in November and the RWC.

The 23-year-old was in the All Blacks training squad in 2012 but hasn’t yet made his debut due to fitness concerns expressed by Steve Hansen.

END_OF_DOCUMENT_TOKEN_TO_BE_REPLACED

Fiji, Samoa and Tonga will enjoy the best preparation yet for a World Cup after the November Tests were announced by the International Rugby Board.

With some compelling matches, November will see Tier Two teams clash with some of the top sides in world rugby ahead of next year’s RWC.

Fiji, who open Rugby World Cup 2015 against host country England, will benefit from a demanding schedule as they face 2015 pool opponents Wales in Cardiff on November 15, just one week after they play France in Paris.