Within five minutes the Australians used it in the 2015 Rugby World Cup then on Saturday ditto; scoring two tries by the rolling mauls.

END_OF_DOCUMENT_TOKEN_TO_BE_REPLACED

“Why play Botia at flanker?”

A question was made by one of the readers of Fiji Rugby Post’s latest post titled “Loose forwards need to negate Pocock” on why incumbent Flying Fijian inside centre Lepani Botia should play as a loose forward.

“Botia has never played flanker for Fiji. Why would they start him there now?” questioned Isaia Lawaniyasana on the Facebook Page Green & Blue Fiji.

END_OF_DOCUMENT_TOKEN_TO_BE_REPLACED

The combination of Lepani Botia and Semi Radradra in the centres against the Ikale Tahi Tonga on Saturday underlined the importance of selection for the Flying Fijians for each opposition in the coming Rugby World Cup.

The pair stood their ground in controlling the Tongan onslaught and had loads of resilience to turn the tide from defence to attack in the little possession afforded the team which resulted in two quick fire tries in the first half.

END_OF_DOCUMENT_TOKEN_TO_BE_REPLACED 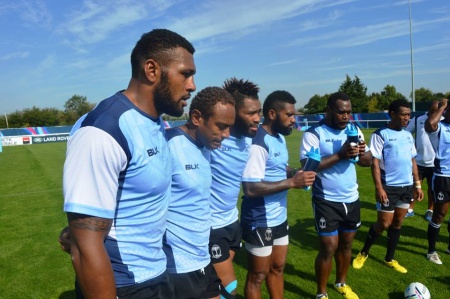 Lepani Botia (5th from left) takes a drink during training with the backs for the Fijian side. Photo: Fiji Rugby

The naming of Lepani Botia at centre alongside Vereniki Goneva by Flying Fijians head coach John McKee in the match against Wales on Friday morning is a breath of fresh air for Fiji’s attack division in the Rugby World Cup.

Botia will bring a new dimension of attack that has been missing seeing a stable attack from the backs but lacking in thrust which is needed to damage opposition defences.

Botia who has the size and guts to run through opponents and the grunt to punch holes in any defence will be needed for Fiji to stake a claim of free passage to the 2019 version in Japan.