The recent debut of three Fijians in separate Tier One nation teams has highlighted the fact that the Fiji Rugby Union is sitting on a wealth of resources that if tapped dilligently and frugally will bring dividends in abundance. END_OF_DOCUMENT_TOKEN_TO_BE_REPLACED

Teddy Thomas became only the second Frenchman ever to score a hat-trick on debut as France cruised past Fiji, 40-15 in Marseille.

The Racing winger had his first try inside 60 seconds, and added two more after the break, in a morale-boosting win for Philippe Saint-André’s charges.

END_OF_DOCUMENT_TOKEN_TO_BE_REPLACED

Talebula will be Fiji’s fullback against France. Photo: Planet Rugby

Fiji have named a strong line-up for their November opener against France in Marseille with Akapusi Qera captaining the side.

Fiji coach John McKee has been able to welcome back Masi Matadigo at number eight after he missed the June Tests, while Nemani Nadolo is a surprise inclusion on the bench after a disrupted build-up.

END_OF_DOCUMENT_TOKEN_TO_BE_REPLACED

Fiji have never beaten France in eight attempts and Philippe Saint-André knows he can’t afford to see that record broken in Marseille.

Les Bleus endured a disastrous June Tour to Australia as they were whitewashed by the Wallabies, a 6-0 defeat in the second Test proving to be their most impressive result.

END_OF_DOCUMENT_TOKEN_TO_BE_REPLACED

Wings clash . . . Alipate Ratini (with ball) of Grenoble is tackled by Metuisela Talebula of Bordeaux in an earlier Top 14 match. Photo: Skysports

Flying Fijian Ratu Alipate Raitini  scorched away for a try from an offload up the middle before the half time break keeping his visiting Grenoble side in touch 14-17 against Toulon at the Stade Mayol on Sunday but eventully losing 28-61 in the Top 14.

The try was Raitini’s ninth touchdown of the season which will bode well for his chances for selection by Flying Fijian coach John McKee for a debut against France at the Velodrome in Marseille on Saturday.

END_OF_DOCUMENT_TOKEN_TO_BE_REPLACED

Fiji, Samoa and Tonga will enjoy the best preparation yet for a World Cup after the November Tests were announced by the International Rugby Board.

With some compelling matches, November will see Tier Two teams clash with some of the top sides in world rugby ahead of next year’s RWC.

Fiji, who open Rugby World Cup 2015 against host country England, will benefit from a demanding schedule as they face 2015 pool opponents Wales in Cardiff on November 15, just one week after they play France in Paris.

END_OF_DOCUMENT_TOKEN_TO_BE_REPLACED 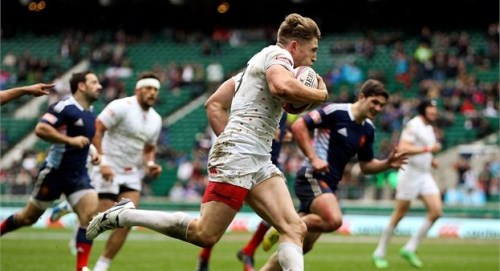 At the halfway point of the FIRA-AER European Sevens Grand Prix Series England’s men lead the way in the standings after claiming the Moscow title with a crushing 47-12 victory over Portugal in Sunday’s final.

England’s Moscow triumph came on the back of a disappointing seventh place finish in the first tournament in France and will serve as an ideal confidence booster ahead of next month’s Commonwealth Games.