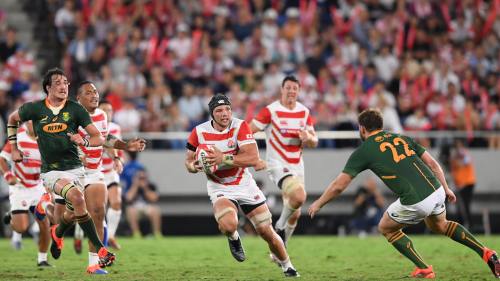 Braves Blossoms lost their steam in their quarterfinals against South Africa. Photo: NikkeiAsia

In spite of the last minute effort by the Welsh to comeback and snatch a win from France; the Red Dragons look the better contender to advance to the finals against England in a fortnight.

Watching the game on television last night, the French had done enough to win the match but didn’t have the killer punch to amass enough points to keep the margin clear from the grasp of the Six Nations champion, Wales.

END_OF_DOCUMENT_TOKEN_TO_BE_REPLACED

Typhoon may hand Fiji a place

Wales sing their national anthem before their win against Australia. Photo: BBC

The introduction of Super Typhoon Hagibis to the Rugby World Cup which threatens the last pool matches over the weekend would very likely favour the Flying Fijians.

END_OF_DOCUMENT_TOKEN_TO_BE_REPLACED 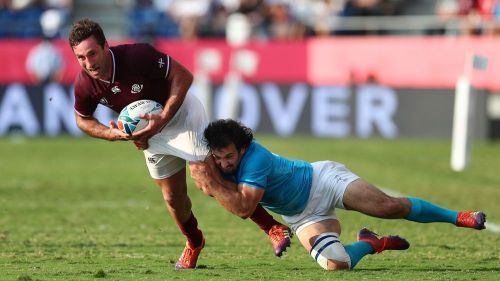 Georgia’s Alexander Todua is brought down by Uruguay’s Manuel Ardao in their pool match on Sunday. Photo: World Rugby

Flying Fijians coach John McKee has identified the strength of the Georgians in their pool D match today at the Hanazono Rugby Stadium which is their only hope of regaining some semblance of dignity after the two losses in as many games at the Rugby World Cup.

“We know Georgia’s strengths and are prepared for a battle around the set pieces and the breakdown” McKee told Fiji Rugby Union.

END_OF_DOCUMENT_TOKEN_TO_BE_REPLACED

Fiji needs a miracle to advance to the playoffs of the Rugby World Cup after the shock 27-30 loss to Uruguay yesterday at the Kamaishi Recovery Memorial Stadium.

With the two points gained; one from the four tries scored and the other point by losing by less the seven points; Fiji needs to see the results from the seeded teams; Australia and especially Wales to falter with no bonus points to advance.

END_OF_DOCUMENT_TOKEN_TO_BE_REPLACED

The Brave Blossoms celebrate after upsetting the Springboks in the 2015 Rugby World Cup. Photo: Getty Images

Just like the violent tsunami that hit Kamaishi, the aftereffects of the 2011 great Sendai 9.1 earthquake, a Tier 2 nation will win the Japanese Rugby World Cup after the final at the International Stadium in Yokohama on November 2.

Either hosts Japan or Fiji will win the number IX showcase event after Tier One nations New Zealand, Australia, South Africa and England dominated proceedings in the past eight tournaments.

END_OF_DOCUMENT_TOKEN_TO_BE_REPLACED

Lloyd Williams happy to wing it for Wales 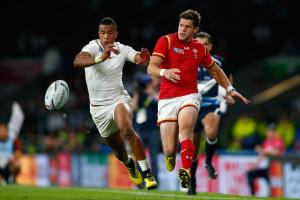 Scrum-half forced to play out of position reveals he and Gareth Davies re-create try that beat England for fun
The experiences of scrum-half Lloyd Williams sum up the story of Wales so far at Rugby World Cup 2015.
The Welsh have reached a quarter-final meeting against South Africa on Saturday despite suffering a remarkable series of injuries. Williams has twice been forced to play out of position on the wing when he has come on as a replacement.
END_OF_DOCUMENT_TOKEN_TO_BE_REPLACED

After Welsh grit, Gatland was scathing of draws 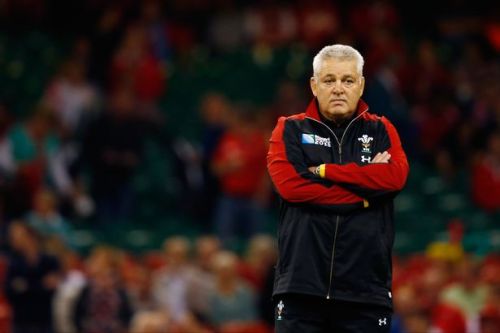 After surviving what he called the “group of hell,” Wales coach Warren Gatland was scathing of a Rugby World Cup draw that was based on rankings three years ago and resulted in his team ending up in Pool A with two-time champion Australia, 2003 winner England, and Fiji, a team that easily could have contended for the quarterfinals.

England’s back-to-back losses to Wales and Australia meant a host team became the first to miss out on the quarterfinals. Gatland, a New Zealander, was stuck between a rock and a hard place while watching the game at Twickenham on Saturday — needing Australia to beat England to ensure the pool would be decided before his Wales team meets the Wallabies next week, which came with the unpalatable concept of being a Kiwi supporting his archrival Aussies in a sporting contest.