The Brave Blossoms celebrate after upsetting the Springboks in the 2015 Rugby World Cup. Photo: Getty Images

Just like the violent tsunami that hit Kamaishi, the aftereffects of the 2011 great Sendai 9.1 earthquake, a Tier 2 nation will win the Japanese Rugby World Cup after the final at the International Stadium in Yokohama on November 2.

Either hosts Japan or Fiji will win the number IX showcase event after Tier One nations New Zealand, Australia, South Africa and England dominated proceedings in the past eight tournaments.

Tier 2 nations Argentina, Fiji and Samoa have broken into the knockout stages reaching the quarterfinals while the South American giant has reached the final four in 2015.

But the outstanding Brave Blossoms form during the Pacific Nations Cup closing tomorrow in Fiji has exceeded expectations and promise to easily top pool A of the RWC by toppling seeded opponents Ireland and Scotland.

Japan who will face 2015 victim South Africa in the quarterfinal look to repeat the feat in the knockout stage with more ease and a bigger scoreline defeat compared to the struggle in pool play in the British Isles.

The second semifinal between Japan and Fiji at Yokohama on Sunday October 29 will face England who will be victorious over reigning champions New Zealand in the first semifinal.

Fiji will top Pool D and will defeat seeded first tier nations Australia and Wales and will overcome the second team from Pool A, Argentina in the third quarterfinal.

The mouthwatering semi-final clash between Fiji and Japan will turn out the eventual winner of the tournament breaking the stranglehold of tier one nations and venturing into a new era in world rugby.

Thank you world rugby for keeping your hierachy structure intact at all costs, but the outcome of the 2019 RWC will see them come tumbling down. 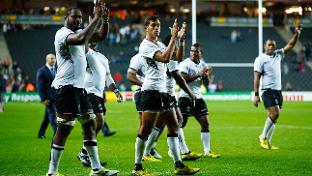 Fiji waves to the crowd to bow out of the Rugby World Cup after the match against Uruguay. Photo: World Rugby