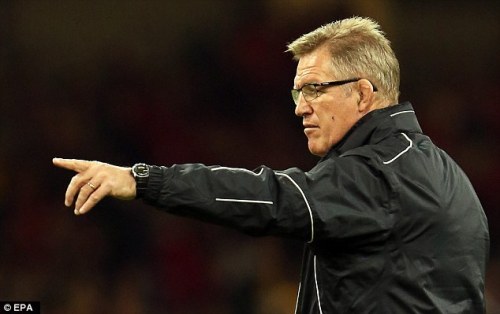 Flying Fijian coach John McKee has denied reports that he was heading to Japan after the Rugby World Cup.

“There has been some media speculation but I am committed to Fiji rugby,” McKee said to the media in the post-match conference at the MK Stadium in Milton Keynes in England.

The Kiwi coach was responding to media reports from Australia that suggested he and his assistant coach and South African Frans Ludeke were heading to Japan to take-over their national team and the Sunwolves, Japan’s new Super Rugby side.

The Flying Fijians celebrate after the 47-15 win over Uruguay yesterday. Photo: Reuters

Minister for Sports Laisenia Tuitubou told the Fiji Sun newspaper that Fiji needed McKee and it would be unfortunate to lose McKee whose record speaks for itself.

“Fiji’s performance against England, Wales and Australia at the Rugby World Cup is something we should all be proud of,” Mr Tuitubou said.

“There has been a major improvement in the scrums and lineouts and we need to keep on improving from here.

“McKee has proved his worth as national coach so we need him to prepare the team for the next 2019 RWC in Japan.”

Fiji Rugby Union chief executive officer Radrodro Tabualevu also told the Fiji Sun that the reports from the media were all speculation and the FRU had yet to receive confirmation from him.

Tabualevu said McKee had signed a four year contract last year as coach of the Flying Fijians and would have to go through the system and discuss terms before the possibility of moving on.

“He signed a four-year contract last year and if he wants to leave, he has to go through the system and there will be thorough discussion before we come to a conclusion. But for the time being, we hear nothing from John to confirm the report.”

McKee had led the Fijian side to huge strides in the game winning the 2015 Pacific Nations Cup and victories over Italy and good matches against France and Wales in the November tour last year.

The team recorded an unprecedented 100 percent in winning own scrums in the Rugby World Cup against England, Australia and Wales; winning a key tighthead against England in their five metre line that directly resulted in a Nemani Nadolo try in the 30th minute.

The departure would have been a big blow to the Fiji Rugby Union and would have undermined the new-look side that has regained respect from the Rugby World Cup and rugby fans in Fiji and abroad.

McKee had also identified several projects to World Rugby that would establish the front three forwards which has been Fiji’s weak point for several decades since the switch to professionalism after the 1995 World Cup.

McKee was content with the win and praised the Flying Fijians for their hard earned win.

“I thought the boys did quite well for a lot of the game and then the wet conditions probably hindered us a little. Credit to Uruguay they were tenacious in defense that they snuffed out a lot of our attack,” McKee said.