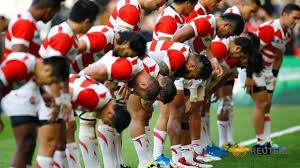 Twenty per cent of the entire Japanese population tuned in to Saturday’s match which the Brave Blossoms won 26-5 to record their second victory at the tournament, World Rugby said on Monday.

The new record television audience for a rugby match beat the 20.7 million in France that saw England win an epic World Cup semi final in Paris against the home country 14-9.

“This is a significant result for the game in Japan,” said World Rugby chief executive Brett Gosper.

“It shows that the general population there appreciate the sport and the amazing performances of their national team over the past few weeks.

Japan will stage the World Cup in 2019 as the world body seeks ways to boost the sport’s global profile.

Japan play their final Pool B game against the United States in Gloucester on Sunday and could still qualify for the quarter finals if leaders South Africa and Scotland slip up in their games.

Coach Eddie Jones says Japan should be named “team of the tournament” if they get another win. The Samoa victory followed a stunning 34-32 triumph over South Africa.

Japan’s players are getting better – partly because they watch more rugby on their iPads than other squads, according to forwards coach Steve Borthwick.

“Each week we’re going up against teams that are much taller than us, bigger than us,” said Borthwick.

The Cherry Blossoms celebrate the win against the Springboks. Photo: World Rugby

“Each time we’ve had to overcome that and they’ve done really well.

“Their work rate is outstanding and they’ve been tremendously physical,” added the 35-year-old.

“One thing is clear: people think our drive is a threat now. They’re having to commit a lot of players to stop it.”

He said the Japan squad had come to England determined to show the country both deserves respect and to host the 2019 World Cup.

“The players have taken it upon themselves to inspire the next generation of players.”