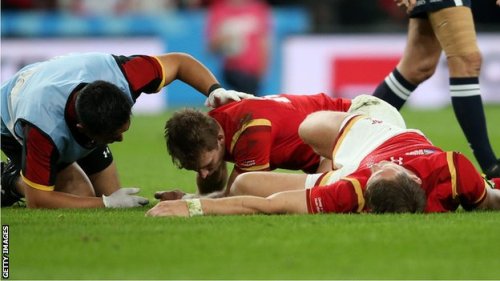 Wales players get attention from their medics during the match against England at Twickenham. Photo: Getty Images

Wales face Fiji on Thursday having had only four days to recover from their bruising win against England.

Gatland will not use it as an excuse during this World Cup but believes it is an issue which needs to be addressed in the long term.

“It’s something we all need to be aware of because it’s a pretty brutal game at the moment,” he said.

“It’s important we consider and look after the welfare of our players as well.

“I’m not complaining about the short turnaround because we’ve known about that for a long time. We’ve had to prepare for that.”

Wales are second in Pool A having beaten Uruguay and England in their opening two matches of the World Cup.

After playing Fiji at the Millennium Stadium, their final group game on 10 October is at Twickenham against current leaders Australia, who face England on Saturday.

The short turnaround between fixtures has been an issue for other teams at the World Cup, with Japan given only three days’ rest after their historic win against South Africa before they were soundly beaten by Scotland.

“We’ve still got guys who are battered and bruised this morning and we’ve got a game in two days,” the New Zealander added.

“I don’t know whether four or five-day turnarounds in World Cups are too short.

“When you’re involved all the time you don’t see the changes but the only gauge I have as a coach is my involvement with the Lions in 2009 (South Africa) and 2013 (Australia).

“South Africa is one of the most physical countries to go and play and then, from South Africa to Australia, the step-up in physicality and intensity increased massively.”