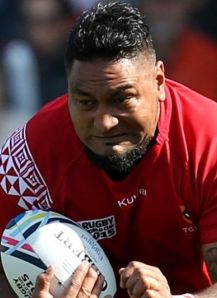 Tonga prop Halani Aulika said there would be a paradigm shift when his team play against Namibia in a Pool C fixture at Sandy Park tomorrow morning.

Aulika, who was on the field for 64 minutes during that surprising defeat against Georgia in their opening World Cup match, said the onus would now be on Tonga to take the initiative.

The direct approach adopted against Georgia simply did not work under the circumstances.

“We learned a lot from the first game against Georgia. We went there with our physicality but it didn’t work, we kept running in straight on them,” said Aulika.

“We need to start moving the ball. We need to bring a different game plan for the next game,” added the London Irish prop.

There has never been any doubt about the capacity of the Tonga forward pack. The key will be to help it set the backline up for a more expansive approach.

“It’s going to be physical; their scrum will be hard to stop. They’ve got a few big players on their team and it’ll be hard scrummaging against them, but we’ll be all right as long as we stick to our game plan,” he added.