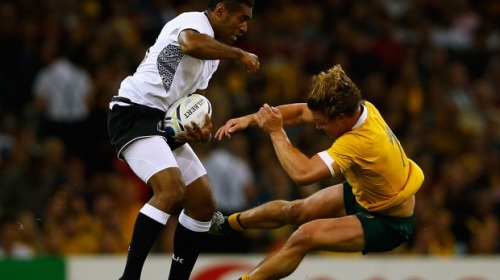 You can call it the Japanese Effect – or simply tournament management.

But the Wallabies are adamant they made the right moves in a physically brutal contest against Fiji and they have would not change their tactics after scoring three tries in the first 42 minutes of the game.

Stand-in Wallabies captain Hooper made the call to protect the Australia’s lead by taking a penalty shot in the last 10 minutes of their 25-13 win against Fiji in Cardiff.

The decision drew criticism given the Wallabies needed to score one more try to secure a bonus point, which could prove crucial in the pool of death stage of the tournament.

With regular skipper Stephen Moore on the bench and the Wallabies leading 25-13, Hooper opted for a shot at goal to settle the tempo of the game.

Fiji were threatening to strike, and with Japan’s heroics against South Africa in the biggest upset in World Cup history still on their minds, Hooper played it safety first.

“Yeah, all day,” Cheika said when asked if he backed Hooper’s call.

“In reflection you can always sit back and look at every decision made, but if we are planning we need a [bonus] point because we are worried we might skim through … I just want to go a game at a time and take whatever is there.

“For me, it didn’t even resonate at the time. I thought the logical approach is get out beyond two [converted tries] and then you do what you can from there.

“That’s the way rugby has always been played at Test match level, and I certainly am not going to disrespect the opposition because anything can happen.

“You give away an intercept try, or something happens, and then all of a sudden you are in a game where the other team scores and the crowd were behind them obviously.

“You have to make sure of the result and that’s what he did. I thought it was the right call at the time.”

The Wallabies weren’t at their best in their clash against Fiji, but they were starved of possession in the second half and showed signs they are building a strong World Cup campaign.

The bonus-point issue has been thrust into the spotlight after both England and Wales secured an extra point in their opening games.

Every advantage will be crucial in advancing from the “pool of death”, but the Wallabies have a simple outlook that they will progress to the next stage if they win all four group games.

Former Test fullback Greg Martin said: “There was a decision by Michael Hooper when he became captain to take a penalty goal that put us 14 points ahead. He may rue that one because we were going so well. I think he was scared of our lineout.” 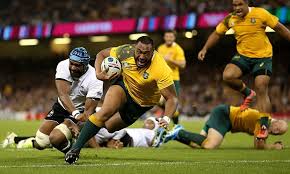 Sekope Kepu goes in for the Wallabies third try against Fiji. Photo: SMH

The Wallabies scored two of their three tries from rolling mauls off the back of their lineout play.

But the lineout struggled in the second half and they missed opportunities to rumble through the Fijian pack.

The next challenge is against Uruguay, with Cheika to select a completely different starting XV for the match.

But the Wallabies won’t deviate from their plan to keep building a beast capable of lifting the World Cup.

“I was happy [against Fiji]. Obviously there’s room for improvement in a few areas, but I thought our defence was really good,” Cheika said.

“…Where I wasn’t [happy], a couple of poor decisions where we kick the ball straight back to them after a turnover.

“We didn’t really have the ball to do anything with … it’s like we didn’t make any inroads. But defence is an important thing in a tournament like this, and having to work like that [against Fiji] would have been really good for our confidence.”

Cheika will announce his team later on Friday, the second-string Wallabies getting a chance to press their claims to win more game time.

The Wallabies are expected to account for Uruguay in Birmingham before switching their focus to tournament hosts England.