Fiji eye ‘pool of death’ as land of opportunity

While Pool A is regarded as a pool of death with marquee sides England, Australia and Wales battling for the two play-off spots, fourth-seeded Fiji see only a “pool of opportunity”.

They believe they can muscle their way into a quarter-final slot, and even if they do fall short they aim to finish in the top three of the pool to be guaranteed a berth at the 2019 World Cup in Japan.

That means targetting Wales and reliving their glory days from the 2007 World Cup when they did beat the Six Nations side and made the knockout stages.

“There has been talk of the pool of death. For England, Australia and Wales perhaps it is. For us it’s a pool of opportunity,” coach John McKee says.

“I believe that we can perform very well and can win games against Tier 1 Nations.”

Former Wallabies coach Bob Dwyer is also a believer, picking Fiji to knock off one of the big three.

“That’s how serious a threat they are,” he said.

“I think they’re going to take a major scalp and that will ensure that whoever they beat won’t get out of the pool.”

After making the quarter-finals in 2007, Fiji had an awful 2011 World Cup where they again drew Wales in pool play and were crushed 66-0.

Fiji doing the cibi in the opening of the Test match against France at the Velodrome in France. Photo: AFP

But four years on they return to the centre stage a sharper, more skilled unit under New Zealand-born coach John McKee.

In the first match after he took charge last year Fiji beat Italy for their first win over a Tier 1 side since their historic victory over Wales seven years earlier.

They narrowly lost to Wales 17-13 when down to 14 men in Cardiff at the end of the year and then thumped the Cook Islands 108-6 in the World Cup qualifier at the start of this year.

They further displayed their credentials in the lead up to the World Cup when they beat Pacific arch-rivals Samoa to win the Pacific Nations Cup in a tournament also involving fellow qualifiers Tonga, Japan, the United States and Canada.

The victory propelled Fiji up to ninth in the world rankings, just three spots behind Wales and caught the attention of England coach Stuart Lancaster.

“That was an impressive performance against Samoa and I can assure you there aren’t just two teams in our pool who are a threat,” Lancaster said on England’s team website.

England play Fiji to open the tournament at Twickenham on September 18 and McKee believes it is England, as the hosts, who will be under the most pressure.

“The final table for the pool will be very interesting. Bonus points and points for and against could decide who goes through,” he said.

With most of their players European-based, Fiji will not be overawed by an England side stacked with players they either line up with or against every week.

Captain Akapusi Qera, a central figure with Montpellier and heading to his third World Cup, scored the opening try when Fiji beat Wales 38-34 in 2007 and faces England full of confidence.

“We are in a pool that has been labelled as a pool of death, and we will survive that pool,” he declared after claiming the Pacific Nations Cup.

Other key playmakers include Leicester utility Niki Goneva, the 2014 players’ player of the year in England and Nemani Nadolo, the standout wing for the Crusaders in Super rugby and who has a Test record of 15 tries from 19 matches.

Powerful lock Leone Nakawara was Glasgow Warriors player of the match when they beat Irish giants Munster 31-13 in the 2015 Pro12 Grand Final.

But there was no room for sentimentality in McKee’s selections with the notable omission of 36-year-old Seremaia Bai, the elder statesman of Fiji rugby who made his debut in 2000. 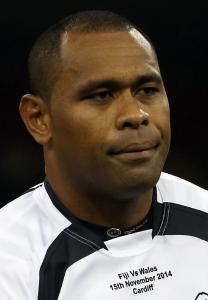 Fiji skipper Akapusi Qera will lead the Fijians from the side of the scrum. Photo: AFP