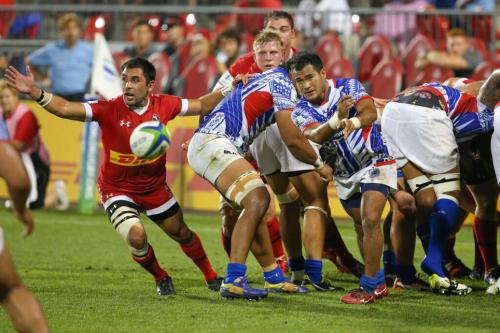 Manu Samoa launch another attack against Canada at the BMO Field in Toronto. Photo: World Rugby

Samoa and Fiji will meet again in the World Rugby Pacific Nations Cup 2015 final after both maintained their unbeaten records with tight victories over hosts Canada and Japan in Toronto on Wednesday.

The Samoans needed a try on the stroke of full-time by Sakaria Taulafo to snatch a 21-20 victory over Canada, the replacement prop catching a loose ball off a ricochet from a lineout to dive over and secure the final place.

Fiji, who had played out a thrilling 30-30 draw with Samoa in round two, had to hang on for a 27-22 victory against Japan, finishing the match with only 13 players as the Brave Blossoms came within inches of completing their comeback with another try.

The opening match of the triple header at BMO Field saw Tonga run out 33-19 winners over the USA, which means the ‘Ikale Tahi will play Japan in the third place play-off on Monday. The fifth place play-off will be a North American affair with winless Canada to face the USA Eagles.

Canada coach Kieran Crowley summed up a match full of drama when he said “a lot of positives but I’m absolutely gutted”, while captain Tyler Ardron said his team had “played our absolute hearts out” but “the ball didn’t bounce our way”.

The hosts thought they had picked up a first win of the competition – and first ever over Samoa – when Phil Mackenzie pierced the Samoan defence with four minutes to go, but two quick penalties for the Pacific Islanders gave them a lineout five metres out from which Taulafo touched down.

“Credit to Canada, they gave us a good game, a good run from the beginning to the end. But credit to my boys for keep fighting … and believing in ourselves, and we came away with the win,” said Samoa captain Alesana Tuilagi.

“We need to cut down the simple mistakes. In the final, we can’t afford to do that.”

Canada, beaten by Japan and Tonga in their two previous matches, came out of the blocks firing and raced into a 13-0 lead after as many minutes, James Pritchard kicking a penalty either side of converting Nick Blevin’s early try.

Samoa finally got on the scoreboard with a 25th minute penalty by Michael Stanley and trailed 13-3 at half-time. Within five minutes of the restart that had been cut to three points when prop some quick ball allowed prop Anthony Perenise to cross the try-line.

Nathan Hirayama missed with a drop goal attempt just past the hour mark and Stanley then kicked Samoa into a 16-13 lead with two penalties, the second from the halfway line, setting up the dramatic finale which had the home crowd in ecstasy and then dismay.

“We were very lucky to come away with the win,” admitted Samoa coach Stephen Betham. “But at the end of the day, the boys again showed character to come back and showed a lot of tenacity to pull it back at the death.”

Three yellow cards in the second half, including two in the last five minutes for forwards Leone Nakarawa and Campese Ma’afu, nearly proved costly for Fiji as a 24-9 advantage soon after the break came within a whisker of being wiped out by Japan.

The Brave Blossoms raced into a 9-0 lead with three penalties from the boot of full-back Ayumu Goromaru before Josh Matavesi started the Fiji recovery with a penalty, and within a quick-fire 10 minutes the Flying Fijians found themselves leading 24-9.

Second-row Tevita Cavubati stepped over a tackler and charged to the line for his first test try in the 20th minute and then Matavesi – who would end the match with 17 points – took a pass from Napolioni Nalaga to hand-off two would-be tacklers to score try number two.

By the 28th minute Fiji had a third try through Metuisela Talebula, the winger collecting a loose ball from a high kick, skipping past a Canadian tackler to jog in for his ninth test try, leaving Japan stunned at the turnaround of the match.

A yellow card within minutes of the restart gave Japan hope of a comeback, prop Manasa Saulo penalised for not rolling away and in his absence the deficit was cut to 24-17 as winger Akihito Yamada dotted down and Goromaru added a penalty after missing the conversion out wide.

Another Goromaru penalty cut the deficit to 24-17 with still just under half an hour to go, the score remaining that way until Matavesi kicked his second penalty on the hour mark.

A try by number eight Hendrik Tui set up an exciting last 12 minutes with Japan’s second try but despite Fiji’s two late yellow cards the Brave Blossoms were unable to get the score they needed to overhaul the Pacific Islanders to the frustration of coach Eddie Jones.

“It’s one of those things where they’ve got guys in the bin, a penalty try is in the air,” Jones said. “You’ve got to execute really well and we just weren’t sharp enough in our execution.”

“It’s a game we should have won easily. It’s not a good result at all. We were careless in the first half. At 9-0 we had them under so much pressure and carelessly gave away points. It’s the worst game we have played in a long time.”

Fiji captain Akapusi Qera knew his side were fortunate to survive with the victory. “In the first half we started off well. In the second half we had discipline issues. The boys dug in and we managed to come out with a win.

“It was a good game to be a part of. It’s always a close game against the Japanese. Their forward pack is one of the best in the world. Now we will have to go back and look at some of our mistakes and work towards next week.”

SEVEN IN A ROW FOR TONGA

Tonga’s victory in the opening match had left them an interested spectator, hoping that Fiji or Samoa would slip up to give them a chance of making the title decider at Swanguard Stadium in Vancouver on Monday.

The Tongans open their match against the USA with their version of the haka. Photo: World Rugby

Fly-half Kurt Morath kicked 18 points in the 33-19 victory, with wingers Fetu’u Vainikolo (2) and Telusa Veainu scoring the tries that gave the ‘Ikale Tahi a seventh consecutive victory over the USA Eagles.

Vainikolo kicked off the scoring in the fifth minute, breaking four tackles to touch down under the posts, before Folau Niua and Morath traded penalties. The Tongan fly-half then kicked two of his further three penalty attempts before the break to send his side in leading 16-3.

Some great ball movement by the Tongan backs resulted in a try for Veaniu in the 52nd minute before, once again, Morath and Niua swapped penalties to keep the margin at 17 points, the ‘Ikale Tahi leading 26-9 as the hour approached.

Vainikolo’s second try of the match came after a good break by flanker Jack Lam, who gathered a loose ball off a lineout before breaking two tackles and offloading for the winger to stroll over the line.

The Eagles weren’t done though and replacement Andrew Durutalo scored a brace of tries the final 11 minutes, but they came too late to have any chance of fashioning a remarkable comeback, leaving coach Mike Tolkin unhappy.

“There were too many turnovers in the first half,” Tolkin said. “We played too much in our own half and not where we intended to play the game. That’s on our decision makers.”

Tonga replacement Hale T’Pole was not entirely happy with the win but was able to draw positives from the victory, which secured third place in the overall standings for Tonga to complete a top three of the Pacific Island nations.

“We got the win but we’re not totally satisfied about it,” Hale T’Pole said. “Today we tried out some new players, they put their hand up putting more pressure on the coaches to pick them for the World Cup. That’s crucial.”