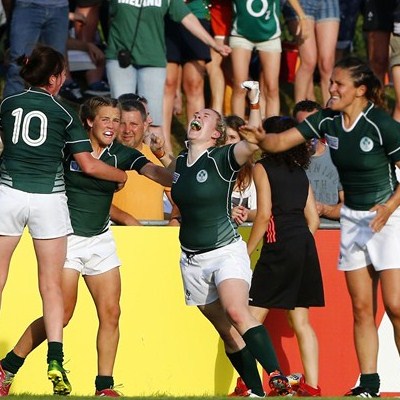 Ireland produced one of the shocks of Women’s Rugby World Cup history by beating four-time world champions New Zealand on an historic day at Marcoussis. As a result of their 17-14 victory, Philip Doyle’s side has taken command of Pool B with a two-point lead now established over the Black Ferns and USA, who meet in the final round of pool fixtures on Saturday.

Another mouth-watering tie lies in wait in Pool A where England and Canada are separated only by points difference at the top of the table, after both teams recorded their second consecutive bonus-point wins of the competition.

Pool C is between host nation France and Australia who made it two wins from two with comfortable victories over South Africa and Wales respectively. France need to avoid defeat against the Wallaroos to progress to the knockout stages as pool winners.

Pool A: England  and Canada score a perfect 10

England made it two from two in Pool A, beating Spain 45-5 to set up a winners-takes-all clash with Canada on Saturday.

Gary Street’s side, showing 12 changes from the line-up that defeated Samoa on day one, scored six tries to Spain’s one, with Kay Wilson, Danielle Waterman, Laura Keates, Claire Allan and Marlie Packer – who landed a brace – all dotting down. Emily Scarratt added 15 points thanks to a flawless performance from the tee, the 24-year-old centre landing all seven of her attempts at goal to draw rich praise from her head coach.

“It’s great to have a kicking option like Emily Scarratt,” said Street. “I’ve seen a lot of kicking performances from women over the years, but that was one of, if not the, best I’ve ever seen. To get seven from seven in the pressure of a World Cup is a testament to her character.”

Like England, Canada boast a perfect 10 points from 10 record after running in half a dozen tries in a 42-7 win over Samoa.

Magali Harvey, hat-trick hero from the first match against Spain, failed to cross the whitewash but still contributed greatly to the Canadian cause through her five conversions before being replaced late in the second half.

Instead, Canada’s tries were scored by Mandy Marchak, Brittany Waters (2), Elissa Alarie, Stephanie Bernier and Andrea Burk, who converted her own try late on.

“We’re very excited about the win today and to get the bonus point was our goal as a team,” said Vancouver native Waters.

“I’m happy about my performance today and scoring two tries, but my team’s effort was what set the platform for them and I think the team effort is what’s most important.

“I think it’s going to be a great game against England on Saturday. I think we improved on our first game and if we can continue to be strong in the breakdown against England we can be successful.”

Ireland recorded an historic victory over New Zealand in the Women’s Rugby World Cup to end the Black Ferns’ 20-match winning run in the competition.

In what was only their second-ever defeat in the history of the tournament, the Black Ferns were consistently pressurised into mistakes by an aggressive Irish defence and were outscored by two tries to one.

New Zealand countered a good start from the Irish with the first try of the match when Selica Winiata went over in the corner to add to Kelly Brazier’s early penalty.

However Ireland responded with a try from number 8 Heather O’Brien, with the gap closed to a single point at the break after Niamh Briggs’ conversion.

New Zealand started the second half in complete contrast to the first and a second Brazier penalty re-established their control of the scoreboard.

The match turned on its head though when a loose kick down field was gathered in by the excellent Briggs. The full back charged forward and found the onrushing Alison Miller on her shoulder with a well-timed pass and the winger raced clear of the cover defence for a fine try.

Briggs landed a touchline conversion that the watching Johnny Sexton would have been proud of to put Ireland into a three-point lead, but that was quickly cancelled out by the boot of Brazier.

Some more good work from Briggs created another scoring opportunity 10 minutes from time and she made no mistake from the kicking tee with what proved to be the final scoring act of the match.

“All the credit should go to the coaches, the analysis and the game plan they gave us,” said Ireland captain Fiona Coghlan. “It’s absolutely wonderful to win against the world champions and tonight we’ll go out and enjoy a beer and tomorrow start getting ready again for Kazakhstan.”

Ireland will be firm favourites to beat bottom-of-the-table Kazakhstan in the final round of pool fixtures, while four-time world champions New Zealand now face USA, the only team other than Ireland to have beaten them at a Women’s Rugby World Cup, back in the 1991 semi-final.

The USA Women’s Eagles got their WRWC 2014 campaign up and running at the second attempt after overcoming an early fright to beat Kazakhstan 47-7.

USA fell behind to a 13th minute try from Kazakhstan fly half and captain Anna Yakovleva but that was as good as it got for the Nomads who visibly tired in the sweltering conditions.

Five of the Eagles’ eight tries came after the break, with centre Sylvia Braaten helping herself to a brace in the space of eight minutes.

USA would easily have racked up a half century of points over the Asian champions for the second consecutive Women’s Rugby World Cup had Hannah Stolba landed more than two conversions.

Next up for the USA is a meeting with the Black Ferns. “It’s going to be a real challenge for us, but we will prepare for the game like we do every other; we’re looking forward to it,” said Eagles’ captain and number 8 Kate Daley.

When Tricia Brown crossed for her second try of the match 10 minutes into the second half the Wallaroos looked good for the maximum five-point return against Wales. However resilient defence and a lack of composure at times in attack prevented the girls in green and gold bettering their three-try return in the opening day win over South Africa.

“I’m very happy with the performance today – they stuck it to us and we’re happy to come away with the win,” said Australia captain Shannon Parry. “We know at the end of the day you have to top your pool to go through, so we have a tough battle against France and whoever comes out on top of that will go through.”

Australia have yet to concede a try in the tournament while Wales are still looking for their first five-pointer.

France proved they have backs every bit as good as their forwards with a brilliant display of 15-man rugby in the final match of a thrilling day of action at Marcoussis.

The first two tries belonged to the pack with number 8 Safi N’Diaye picking up from the base of a five-metre scrum to get the scoreboard moving before South Africa were pressurised into conceding a penalty try after collapsing a scrum in a similar position.

A free-flowing move led to a third try being scored by Elodie Portaries and she was joined on the scoresheet in the first half by Assa Koita and Christelle Le Duff while Celeste Adonis spent time in the sin-bin.

N’Diaye and Le Duff scored their second tries after the break and Elodie Poublan and the pacey Camille Grassineau also got in on the act, to the delight of onlooking men’s national team head coach Philippe Saint-Andre, before the night was complete.