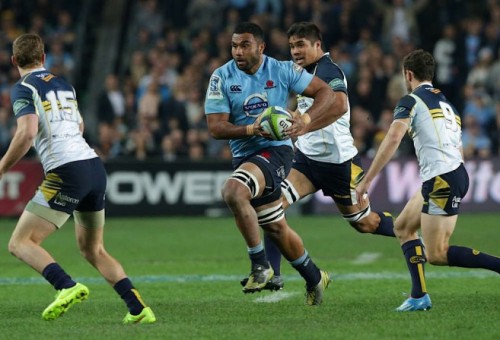 I have been genuinely surprised to read and hear suggestion that Michael Cheika’s team will start the Super Rugby final as anything other than favourites.

The Waratahs finished the season in top spot, scored the most tries by some margin, and conceded the second fewest in the competition.

They’ve comfortably been the best team in the competition in the back half of the season, too, and go into the final on an eight-game winning streak.

Then there’s the perfect record at home this season, including two of their biggest wins of the year coming at ANZ Stadium, over the Reds and Brumbies. In fact, their Homebush record this season has them posting 71 points, while conceding just 13. Ten tries scored and just two let in.

There’s a lot of talk about the Waratahs giving up home ground advantage by playing at Homebush, but since Michael Cheika’s tenure began, they’ve won three of four games there. The one game they dropped was to the Reds, by two points, in the last round of last year.

By my rough, manual trawl through results, the Waratahs’ record at ANZ Stadium appears to be six wins from ten games dating back to 2009. Their overall record in Sydney in that same time is 34 wins from 46 games, and 15 from 17 games under Cheika, including 9 straight wins this year – a pretty imposing record.

Home ground advantage accounted for 85 wins from the 120 regular season games in 2014, and is four-from-four in the playoffs already.

In the 18 previous Super Rugby deciders, the last team to win away from home was the Bulls in 2007, when they beat the Sharks in Durban. It’s only happened three other times, and coincidently, all three were the Crusaders, between 1998 and 2000.

Since the advent of the conference format, the away team has won just 4 of the 19 playoff games to date.

So why aren’t the Waratahs overwhelming favourites already?

Considering the time it took the Crusaders to properly get into the season, it was really only since their bye in Round 11 that they started to come good. And while they did win six of eight matches after their last bye, the Waratahs were well established as the competition pacesetters by then.

There were still a few question marks after the Crusaders lost the Hurricanes in Round 17, too.

So what’s the reasoning? It can’t all be because of the 11-game losing streak to the Crusaders, can it?

Of the 11 games, which stretch back to 2005 and include both finals played between these two sides in 2005 and 2008, only 4 have been played in Sydney. The most recent loss, in Round 16 last year, was by just a point, and the Waratahs scored three tries to two.

There’s certainly no questioning the character of the Crusaders. If anyone is capable of causing a boil-over in the decider, it’s them. And indeed, their character and culture has got them home numerous times this year where they won several games that they perhaps weren’t entitled to. The ability to win games while not playing brilliant rugby is not something to be sneezed at, either.

The Waratahs defended as well as any team I can recall this season, in any game. To force eight errors from the Brumbies in their 13 entries to the Waratahs’ 22 for the match was literally match-winning, no better exemplified than the twin try-saving tackles from scrumhalf Nick Phipps, on Tevita Kuridrani and Robbie Coleman in opposite corners during the second half.

On reflection, the second of those Phipps tackles was the turning point in the match, rather than Kurtley Beale’s steal from Jesse Mogg five minutes beforehand. Had the Brumbies been able to hit back after Beale’s try, its effect would’ve been minimised.

If defence really does win finals, as we’ve come to expect, then I can’t see how the Waratahs prevailing in the more intense, decidedly more physical semi-final doesn’t put them in the box seat on Saturday night.

The Crusaders are back in that groove of turning opportunities into tries, but they won’t get anywhere near as many chances from the Tahs as they did from the generous Sharks.

This is the Waratahs’ best chance for a maiden Super Rugby title, and I can’t see them starting as underdogs.