All Blacks to Samoa a dream come true for Williams 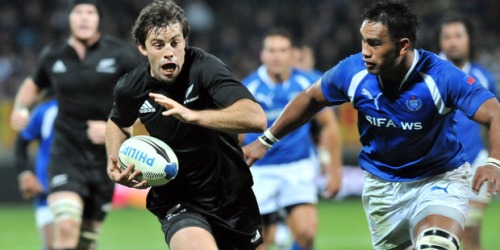 The All Blacks match against Samoa in Apia will be a dream come true for most Samoans. Photo: NZ Herald

Rugby great Bryan Williams has lauded the long overdue decision to take the All Blacks to Samoa for an historic test in Apia which now seems likely to happen in July next year.

As reported by the Sunday Star-Times in May, an historic first All Blacks test in the islands had become an imminent reality after the governments of both countries had met formally on the issue. It’s understood political pressure from John Key’s office, on the back of a high-profile campaign by current affairs show Campbell Live, was the final impetus New Zealand Rugby needed.

It now looks all but certain the match will take place in July next year as part of the All Blacks’ preparations for the World Cup in England. Yesterday NZR boss Steve Tew confirmed the test was likely.

Tew said coach Steve Hansen has signed off on the fixture, the IRB had been consulted around Samoan player availability.

He confirmed negotiations would begin with the Samoan union this week to nail down a date, although July seemed to be the accepted slot in the truncated World Cup year schedule.

“The commercial arrangements will be driven largely by the Samoan union because they will host the game. We haven’t yet spoken to them in any detail.”

All Black great Williams, a former coach of Manu Samoa and a long-time advocate for a test in the islands, said the fixture would have special resonance for anyone who followed New Zealand rugby.

“I’m very pleased and pretty excited about it,” he said yesterday from his beloved Ponsonby club in Auckland. “It will be an acknowledgement of the role Samoa and Samoan players have had in New Zealand rugby.”

Williams, whose father is Samoan, said the historic test would mean a tremendous amount to him personally.

“It’s not only for me. We’ve just had Inga Tuigamala down here and he’s very excited. I can just imagine guys like Michael Jones, Joe Stanley, Olo Brown, Tana Umaga . . . the list goes on and on. Keven Mealamu will be also rapt and so will all their families. It’s pretty special really.”